Be Inspired Explore Colour Find Products Stores About Us 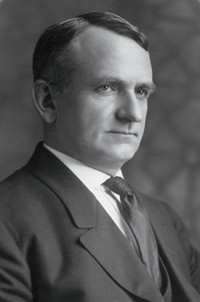 In 1883, Irish born Benjamin Moore and his brother Robert opened Moore Brothers in Brooklyn, New York, having first emigrated from Ireland in 1872. True entrepreneurs, they started with $2,000 and one product, "Moore's Prepared Calsom Finish," which was sold exclusively through independent retailers. Moore Brothers built their company on Benjamin Moore's belief in "The exercise of intelligent industry in the spirit of integrity”, and a dedication to manufacturing excellence and quality.

Moore Brothers Paint Company opened at 55, Atlantic Avenue in Brooklyn, New York. The building burnt down within a year, but the brothers moved to a new location and were back in business 3 days later, displaying a tenacity that would serve their company well throughout its long life. Benjamin and Robert established a New York corporation in 1889 and soon after they incorporated in New Jersey, the company’s current home.

© 2015 - 2022: All design, text, images and the selection, alteration and arrangement of those elements are the copyright of Benjamin Moore UK Ltd or mentioned third parties, reproduced with their permission.

By clicking "Accept All Cookies", you agree to the storing of cookies on your device to enhance site navigation, analyze site usage, and assist in our marketing efforts. Cookie Settings
Accept All Cookies
Privacy Preferences When you visit our website, we may store or retrieve information on your browser in the form of cookies. This information might be about you, your preferences or your device and is mostly used to make the site work as you expect it to. The information does not usually directly identify you. You can choose not to allow some types of cookies below.

Analytics cookies These cookies enable us to track the number of visitors to our website and traffic sources. They help us to improve our website by tracking which pages are the most and least popular and how visitors move around our site. The information these cookies collect is anonymous. Save & Close